The Earth is considered a planet where various life forms can exist. Scientists have discovered other planets where life could possibly exist as well but none like the Earth. It produces oxygen so that we can breathe. It produces other life forms such as animals and plants so that we can grow crops and have food to nourish our bodies.
The Lord has given man the knowledge to develop ways in which we can tour outer space through space crafts (or Rockets). These air crafts have been strategically built to break beyond the Earth’s stratosphere (wow I sound pretty smart…) and explore other planets.
Those explorers who decide to embark on the journey are called Astronauts. In order to survive, or to breathe in conditions that are less favorable than what our bodies our equipped to handle on Earth, Astronauts have to wear specific attire- or an outer layer which is called a space suit. Space suits are worn to keep a human alive in the harsh environment of outer space and extreme temps. This outer protective layer does not reflect who the person is on the inside of the space suit. It’s just a layer of protection.
Lord Jesus. This outer shell that we wear is called the human body. Not only is it designed as a protective layer but it was hand-crafted by our Heavenly Father and He said we were fearfully and wonderfully made. God does not make junk. He creates masterpieces. That’s what you are – a masterpiece. Like a gifted artist, no one design is the same. All of us are uniquely created. However, just as a paintings fade overtime, so does this body of ours. Keep having birthdays and you will learn that the smooth, wrinkle-free, dimple-free, slim and trim physique you once had begins to change.
This human body was constructed for identification purposes. Your family knows you. Your children know you. People know your children by you (“Girl, you look just like your daddy..”) Although you resemble your family and you are identified by your outer appearance, this is not you. The real you is on the inside.

“But the LORD said to Samuel, “Do not look at his appearance or at his physical stature, because I have refused him. For the LORD does not see as man sees; for man looks at the outward appearance, but the LORD looks at the heart.” ‭‭I Samuel‬ ‭16:7‬ ‭NKJV‬‬

We are spiritual beings having a natural encounter. Don’t get caught up in the glory of your earthly body. It cannot please God. In fact, it will get you in trouble.
The world focuses on what people look like on the outside. God focuses on what people look like on the inside. What you do outwardly can and will affect you inwardly.
Your spirit is the real YOU! We are not bodies that have spirits. We are spirits that have a physical body. With our spirit, we choose to either follow our flesh which results in sin, or follow the holy spirit which leads us to listen to the Lord.

“So then, those who are in the flesh cannot please God. For if you live according to the flesh you will die; but if by the Spirit you put to death the deeds of the body, you will live. For as many as are led by the Spirit of God, these are sons of God.” Romans‬ ‭8:8, 13-14‬ ‭NKJV‬‬

Question: “Okay, so you talked about astronauts, space, the body and the spirit. I feel like I’m in an anatomy class mixed with theology school. What is your point?”

Reply: Take off the mask. We go around pretending to be one thing outwardly, hurting those we come in contact with. Claiming with our mouths to represent and to be one thing but our behavior demonstrates an entirely different person. Insomuch, that you’re no longer recognizable by the people you know or even yourself. You do not want to become unrecognized by the Lord.

“Many will say to me in that day, Lord, Lord, have we not prophesied in thy name? and in thy name have cast out devils? and in thy name done many wonderful works? And then will I profess unto them, I never knew you: depart from me, ye that work iniquity.” ‭‭Matthew‬ ‭7:22-23‬ ‭KJV‬‬ 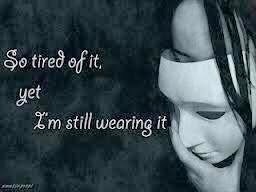 5 thoughts on “Take Off the Mask”