It’s almost that time. Another new year is fastly approaching. It is the beginning of the last quarter of 2016. I’m unsure how you feel, but for me, this year has flown by.

The good news is that it doesn’t matter how we started or even where we are now. What matters is how we finish.

Everyone can start strong, and most times we do; but not everyone finishes strong. Why is that? Starting is fun; it’s new. Starting brings fresh ideas and more imagination and something to looking forward to. Starting is exciting and emotional, but have you noticed that it doesn’t take much time for the initial adrenaline rush to wear off?
It’s time to get back into your “New Year’s” state of mind. Anything God starts, He completes.

“being confident of this very thing, that He who has begun a good work in you will complete it until the day of Jesus Christ;”‭‭ Philippians‬ ‭1:6‬ ‭NKJV‬

The Holy Spirit is determined to complete the purpose He has for us, through us, but we must allow the work to be performed.

Since we are made in the image of God, we should have that same quality of finishing, but we must focus now.

Think it. Write it. Speak it. Believe it! Your new year can start now! 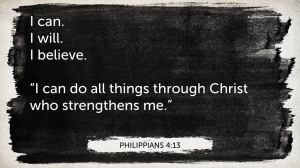