Do you recall being a first time driver? You are beyond excited, well at least I was. I remember when I received my driver’s license at age 16. Man, I was trying to think of everyone’s house I could pull up to, showing them I was now behind the wheel.

When you’re a first time driver, you also take notice of all the signs on the roads and in the car. Well, at least I did. I noticed the deer crossing signs, stop for pedestrians, one way, do not enter, traffic lights ahead, and the warning labels underneath the sun visor about the air bags in the car. They had been drilled in my head through memorization to pass the written test. Once I saw them on the road, my mind was able to recall reviewing them in the driver’s ed book.

Then, once you become comfortable with driving, those less frequent signs seem to be less of importance as we begin to focus on the things we see more frequently like stop and yield signs.

There’s one sign on the side view mirrors of our car that we may miss but it serves a huge purpose. It’s a warning to prevent the driver from having an accident.

“Objects in this mirror are larger  or closer than what they appear.”

I think this statement applies to people’s perception of who JESUS is. Simply because God made a decree that He would send us a Savior, Jesus, who would then die for us and send His Spirit back to literally dwell in us and guide us to live in holiness, we forget how big our Father is. He is closer than what He appears to be, but since we cannot physically SEE Him, He seems so far away.

Jesus cannot reveal His proximity to us because we do not allow Him. We do not take the time to study Him and learn Him as we would a man or a woman we desired to enter into a relationship with.

Our Father is greater than the demonstration we have seen.

He is greater than our enemy, but our enemy boasts more and is granted power through us and because of us. We give our enemy the power. We give the enemy the okay to control our lives when we live contrary to the word of God.

See, back in the day, when I was in school, the group of people who did most of the smack talking were the ones who had nothing to back it up with. They seemed to become more bold and boastful when there was a crowd. Their mouths spoke great swelling words when there was an audience. I learned that it was the quiet storm that you had to look out for; the one who avoided the conflict and did not respond to peer pressure and bullying.

The enemy is a taunter and a bully. He taunts and dares us to deny our Savior because everyone else is doing it- it must be right. He speaks great swelling words against the Lord and has us debating about God’s word and if Jesus is real. We KNOW and are witnesses of all that God has done for us, yet we sit and listen to this mess and begin to give place to these stupid seeds that are planted. Jesus, on the other hand, is confident of who He is and knows that He can literally destroy the enemy. In one day, God destroyed 23,000 people in one day because of their sinful acts.

1 Corinthians 10:8
Neither let us commit fornication, as some of them committed, and fell in one day three and twenty thousand.

Our Father is loving, kind and has compassion on His children, but please don’t get beside yourself. It’s time out for pretending. We would love to see the miraculous demonstration of His power- but in a good way; but you do not want to fall into the hands of an angry Father.

God, our Father, is greater than what you can physically see!

1 John 4:4
Ye are of God, little children, and have overcome them: because greater is he that is in you, than he that is in the world.

We must stop treating Him as if He is like us, because He is not. 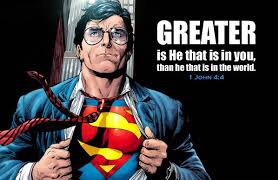 4 thoughts on “Greater is He”